All cannabis is medical, though some use it for recreation, it is medicine.

I want to start with coming straight out that nonsense about a 17% addiction rate.

I’m going to rely on a lot of research involving a medicine from GW Pharmaceuticals, plc Sativex ® (nabiximols) because they’ve done the most research. I would encourage MS/ALS patients and doctors to check out some of the research on their site, if you haven’t already. Publications

Sativex® (delta-9-tetrahydrocannibinol and cannabidiol in the EU) (nabiximols in the USA) Sativex® is an oromucosal spray of a formulated extract of the cannabis sativa plant that contains the principal cannabinoids delta-9-tetrahydrocannibinol (THC) and cannabidiol (CBD) in a 1:1 ratio as well as specific minor cannabinoids and other non-cannabinoid components. We developed Sativex® to be administered as an oromucosal spray, whereby the active ingredients are absorbed in the lining of the mouth, either under the tongue or inside the cheek. We have received regulatory approval for Sativex® in numerous countries outside the United States. In Europe, Sativex® has now received marketing authorization in 21 countries for the treatment of spasticity (muscle stiffness/spasm) due to MS.

If you want to know what the future of medicine looks like, here’s the stuff they’re working on at GW Pharm. (where I don’t work!) Cannabinoid Compounds

So, Sativex is a spray that’s best used under your tongue or inside of your cheek. It’s a full plant extract from a cannabis strain they developed which is ~ 1:1 THC:CBD and peppermint oil. In Canada, it’ll run you about $800. a month, with some exceptions.

The issue of cannabis abuse and dependency remains quite controversial. A cannabis dependency syndrome has been posited (Budney et al., 2004), with an oft quoted figure of 9% of ever cannabis users becoming dependent at some point. In the USA, at least, these figures, which apply to “recreational” usage must be tempered by the fact that greater than 50% of patients admitted to substance abuse treatment programs are there by legal mandate as an alternative to prosecution or incarceration, and not always because of an actual addiction to cannabis. Other authorities opine that cannabis has a DAL lower than that of other legal and illicit agents (Hilts, 1994; Roques, 1998; Nutt et al., 2007). The relative addictive potential of a drug is ascertained by judging its attendant intoxication, reinforcement, tolerance, withdrawal and dependency. DAL requires additional determination of public health and legal data on its degree of abuse and diversion. The advent of the Internet has revolutionized promulgation of drug information to any inquisitive potential consumer.

Herbal cannabis is scheduled in international and national categories that generally designate it as addictive or dangerous, having severe abuse potential, and lacking any recognized medical utility. In contrast, Marinol®, a synthetic form of THC has been down-scheduled in countries where it is an approved pharmaceutical, to a category denoting a lesser potential for abuse or lower dependency risk, after documentation showed rare abuse or diversion to the black market (Calhoun et al., 1998). This precedent is one that could potentially be repeated with cannabis-based medicines once their safety and appropriate DAL risk is demonstrated.

The existence or severity of a cannabis withdrawal syndrome remains under debate (Smith, 2002; Budney et al., 2004). In contrast to reported withdrawal sequelae in recreational users (Solowij et al., 2002), 24 subjects with MS who volunteered to discontinue nabiximols after a year or more suffered no withdrawal symptoms meeting Budney criteria. While symptoms such as pain recurred after some 7–10 days without Sativex, symptom control was rapidly re-attained upon resumption (Wade et al., 2006). Similar safety was noted in a clinical randomized withdrawal trial in spasticity of MS (Notcutt et al., 2012), wherein 36 patients previously improved on Sativex showed no withdrawal symptoms of significance. Additionally, in a study of 136 MS patients taking Sativex for a mean of 334 days, sudden cessation, no withdrawal effects of associated adverse events were reported (Serpell et al., 2013).

While herbal cannabis has lowest overall dependency risk of commonly abused drugs (Hilts, 1994; Roques, 1998; Nutt et al., 2007), that ofnabiximols is apparently lower yet, due to slower peak compared to smoking, low doses required for therapeutic efficacy, virtual absence of intoxication in normal usage, and freedom from withdrawal sequelae even after chronic administration. Finally, no known abuse or diversion incidents with nabiximols were reported (as of March 2013). Formal DAL studies with nabiximols have demonstrated its drug abuse potential to be equal to or less than that of Marinol, which is Schedule III in the USA (Schoedel et al., 2011).

The situation is particularly puzzling for cannabidiol, which seems to be a victim of guilt by association, in that it was placed in Schedule I of the US Controlled Substances Act of 1970 along with cannabis and THC as a placeholder (United States Commission on Marihuana and Drug Abuse, 1972), and has remained there ever since, in spite of meeting no criteria for intoxication, reinforcement, tolerance, withdrawal, or dependency.

Since cannabis can stay in your system for weeks, it’s been demonized, wrongfully accused of being addictive because it does not stimulate that reward centre.

This is interesting, I guess that’s why patients who rely heavily on cannabis, don’t really get high. I wonder if they can fix that? 🙂

Ingram and colleagues report the treatment of chronic pain has challenged the medical system, with medications that are ineffective or create serious side effects: “However, emerging data indicate that drugs that target the endocannabinoid system might produce analgesia with fewer side effects compared with opioids.”

The researchers observed that chronic inflammatory pain increased activity of CB2 receptors and decreased CB1 activity. Cannabis activates both CB1 and CB2 receptors equally. The study suggests that selective activation of CB2 receptors contributes to the medicinal benefit of cannabis while minimizing the propensity of the other cannabinoid receptor, CB1, to induce tolerance and withdrawal. Ingram said the next phase of the research will further explore this area of brain circuitry, which ultimately could lead to the development of a new class of pain medications.

Co-authors include lead author Ming-Hua Li, Ph.D., and Katherine L. Suchland, both with the Department of Neurological Surgery, OHSU School of Medicine. 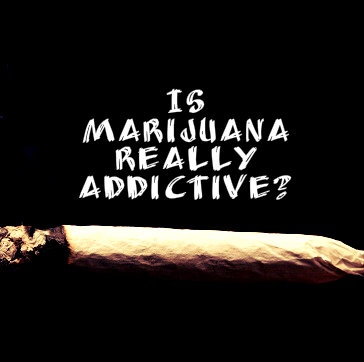 Not really. You may want to use it, but in my experience and observation, most people who aren’t relying on cannabis as medicine, don’t feel like they need to use it, it doesn’t cause that craving.

Do some people abuse cannabis? Sure, but a small fraction of people, and on balance of probabilities, they also feel they need alcohol and tobacco and most anything else they have ever tried while drunk, and, the addiction is psychological and not physical and they have probably been using cannabis as medicine, without even knowing.

It’s time we move forward. People have a right to safer medicine, and safer recreational drugs too!!!  It is way past time.

Come on folks, let’s move forward!  Let’s finally end this war against people intelligent enough to choose the safest drug on the planet.

Get out, get educated, and get active, patients of all ages need your help and have a right to, safer medicines, that won’t kill them in their sleep.

2 thoughts on “Is Cannabis really addictive?”